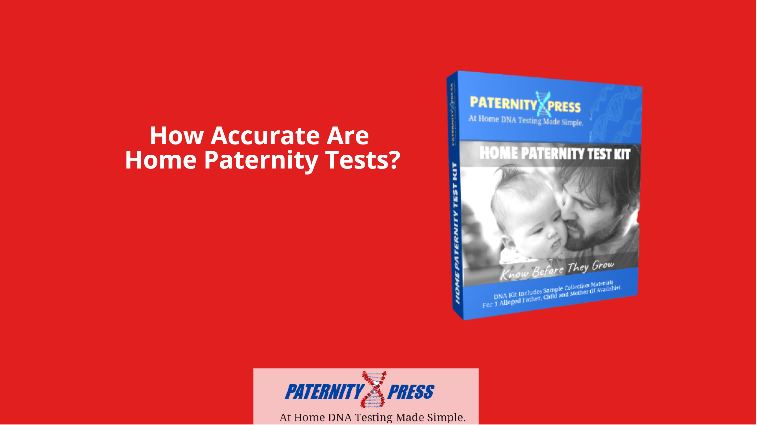 What is a home paternity test?

A home paternity test is a test that can be performed in the comfort of your home, office, or anywhere you deem private. Typically,  A person will have to purchase a Home DNA Paternity Test Kit online. Enclosed within your DNA paternity kit is a chain of custody form, buccal swab packets for the biological father, child and if the mother is available, How to collect your DNA samples instructions, and a return prepaid shipping envelope returning back to the laboratory. It should also be noted that a home paternity test requires the purchaser to collect their own samples.

What At-Home Paternity Tests results can be used for?

How accurate is a home paternity test?

Home paternity testing services we provide are performed by a partner accredited laboratory that performs DNA testing services that produce results that are recognized by Family Court Judges, Immigration office such as USCIS, U.S. Passport Agencies, and U.S. Embassies worldwide. In other words, the testing of a home paternity test is the same as a legal paternity test. Which means the testing methods are accurate. Essentially, how your DNA samples are collected and handled will determine the effectiveness of the lab’s ability to produce a result.

The biggest differences between a home paternity test and a legal paternity test are who will collect the samples and how the results can be utilized. Legal paternity test requires an experience third-party DNA sample collector to collect your samples. The collector will also be responsible for taking a headshot photo and a copy of your ID. The reason a DNA collector is required to collect all the above-described information. All legal tests must establish a chain of custody for your result to be deemed as a legal document. These are the things you can expect when it comes to having your genetic samples collected for legal testing purposes.

Home paternity tests do not require you to provide pictures or your ID. Home testing options allow you to perform your paternity test discreetly and in the comfort of your home to maintain your privacy.

Can I perform an At-Home Paternity Test While Pregnant?

Currently, we do not provide prenatal paternity testing services. As we understand it, Non-invasive Prenatal Testing services can only be performed at a collection facility or if a trained DNA sample collector traveled out to the home of the pregnant mother to draw blood.  There are no Home Prenatal Paternity Testing Kits we are aware of on the market that will allow a mother to collect their own samples.

Can a mouth swab DNA test be wrong?

We are often are asked about the accuracy and validity of cheek swab samples versus using other samples like blood. Here is was should be noted about cheek swab samples. Just using the cheek samples will not produce a wrong result. If swabs are used to collect DNA samples from an alleged father and child who had their samples collected at the same location at the same time. The outcome of the results whether positive (you are the biological father) or negative (you are excluded as the father) would be accurate. Unless one of the participants either alleged biological father or the child has a rare genetic disorder that will skew the lab results. Normally, in order for you to know a possible error has been made. Another DNA test will have to be performed by a different DNA testing lab. The scenario described would be a very rare circumstance and would not apply to the majority of people performing a paternity test.

What should be noted as well. Many times people confuse the difference between wrong DNA test results and badly handled sample collection. Below are four main examples that may contaminate your results or produce a wrong result because the lab will deem the test inconclusive.

1. Too much saliva on the buccal swab sample that was not properly air-dried during the sample collection. Excess saliva/moisture on the swab may attract bacteria that will possibly contaminate the sample. If this is the case the lab will deem the testing inconclusive and a second sample collection will be needed to conclude testing.

3. Mis-handling of the sample collector by not carefully following the instructions may cause samples to become contaminated. Also, a DNA sample collector can potentially mix-up samples with another case which could produce a wrong result. If you believe this is the case. Performing another paternity test with a different DNA testing company is recommended.

4. Another person having their sample collected in place of the alleged father or child can produce a wrong result. This is why it is encouraged that all parties involved with the paternity test samples are collected in the same place at the same time to verify the identity of the participants. Home paternity tests can provide an opportunity for this to happen if one person lives in another country or state from the other tested party.

Unfortunately, we do not have any current or historical data that regarding wrong Home DNA Tests for our industry. What we can speak about is we have not experienced any of our clients complain about results being wrong after taking a second DNA test to confirm the results performed by our partner lab.

Home DNA Paternity Tests are accurate and are tested the same exact way as legal paternity tests. The only difference between a Home peace of mind test and a legal test is home your results can be used.

How accurate are home paternity tests

Can I use a Home Paternity Test Result For Child Support